We created a POC app for premium kitchen designer, Rosanna to allow them to visualise their work and various looks and finishes with ease and to help customers try before they buy. The app used AR kit to allow users to place a mini or life scale kitchen counter into their space in order to preview it’s look and functions.

In 2010, we started to experiment with Augmented Reality (AR) concepts as part of our exploration of technologies, but it was only when we looked at the combination of AR, QR (Quick Response) Codes and parallax 3D that we began to form the model of onvert. As designers, we wanted to make AR as accessible, powerful and inspiring as possible – to make it an extension of creativity rather than a boundary.

Onvert is a combination of a custom web portal and a freely distributed app.
It allows designers to overlay virtual content (with or without sound) on any trigger image of choice.

Anyone can create a 3D virtual projection with up to 30 seconds of accompanying sound. The content is compressed on upload to optimise downloads to a phone, allowing it to be as fast as loading an average web page.

The QR codes can be read by any standard QR reader and, conversely, the onvert viewer can interpret standard QR codes to guide users to the client website. Only the onvert app, however, can project the designer’s 3D content.

We assessed several options to achieve the high level of functionality required of the system, but it became obvious that the Metaio Mobile SDK was the only real solution for us.
We were able to co-ordinate the development of the app to fit in with the new release in January 2012, to positive feedback.

“Partnering with Metaio is part of the dedication and refocusing of our services to embrace the opportunities of AR and its ability to provide clients with new and exciting commercial possibilities.”

This was a small but notable project we did for the Royal Society of Chemistry that allowed us to get our (virtual) test tubes out and show the structure of compounds in 3D.

The project was an educational piece and took the ball and stick diagrams kicking and screaming into the 21st century.
The effect was that rather than seeing a series of dots and triangles to represent chemicals in 2D, the user can visualise atoms in glorious 3D on the page and in context with the script they are reading – clever stuff!

“The augmented insect app that allows you to interact and control a realistic virtual representation of a cockroach, not for those susceptible to Entomophobia (insectophobia)!”

Through AR, users are able to take an educational insight into the striking as well as less distinguished features of this six-legged pest, including the wings, thorax and spiracles.

With the easily selectable cockroach control on the app, users are able to simply highlight different features of the 3D insect to see an in-depth description of individual body-parts.

The extended tracking integrated with a user-friendly interface makes the app ideal for exploring the depths of any environment with the refined free-roam analogue control. Ideal for educational and academic studies, or creepy-crawly enthusiasts, Virtual cockroach offers an immersible experience for all. Available for both IOS and Android

We were invited to attend the TFMA (Technology for Marketing and Advertising) event to showcase Harmony. Adopting a niche-theme specifically for the event, we were able to express ourselves in a new breath, standing out among the competitors not just with our diverse style but also being the only Augmented Reality Company invited to the global event. Incorporating the theme of a Victorian Steam Punk, a transformative blend between Victorian style and contemporary futurism, we were able to depict the power of AR to its upmost.

We created an interactive world, and using our free Emporium apps users could scan elements of our exhibition space and peer into the world of Cornelius Vexheart, our magically dark Victorian character.

To go along with our steam punk theme, we also created an AR ‘flying car’ which emerged from a tiny box. Simple but very entertaining! 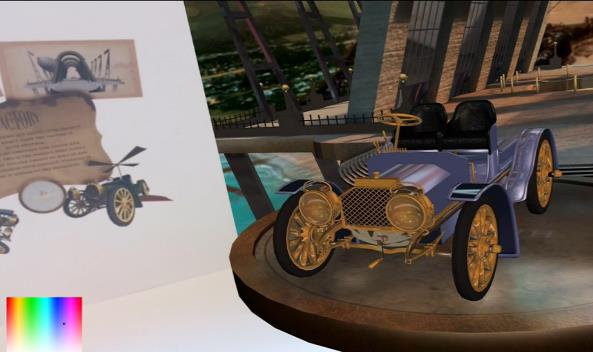 The pharmaceutical industry and holds a reputation for being consistently clinical and professional – but Hospira thought it was about time to inject some fun into the mix.

Beyond the direct usefulness of using augmented reality to visualise medical processes, the technology can be used to enhance many other areas of communications – not just in healthcare, but within many business structures.

Global pharmaceutical company, Hospira, were hosting an event space attended by medical professionals and wanted to create a unique and exciting offering that was easy to use, swift and fun. The aim of the app was to bring a fun and relaxed atmosphere to a highly professional event and break down communication barriers between attendees. Because what’s life without a little fun, right?

We created a smart device app based around acrobatics that took a ‘selfie’ of users and used their faces to construct a vibrant 3D trapeze act scene were they were the star. At the end of the experience users could also stand next to an AR representation of their character and take a photo with them for posterity.

The app worked very effectively at creating an unexpected and memorable experience for attendees and was thoroughly enjoyed and complimented extensively. 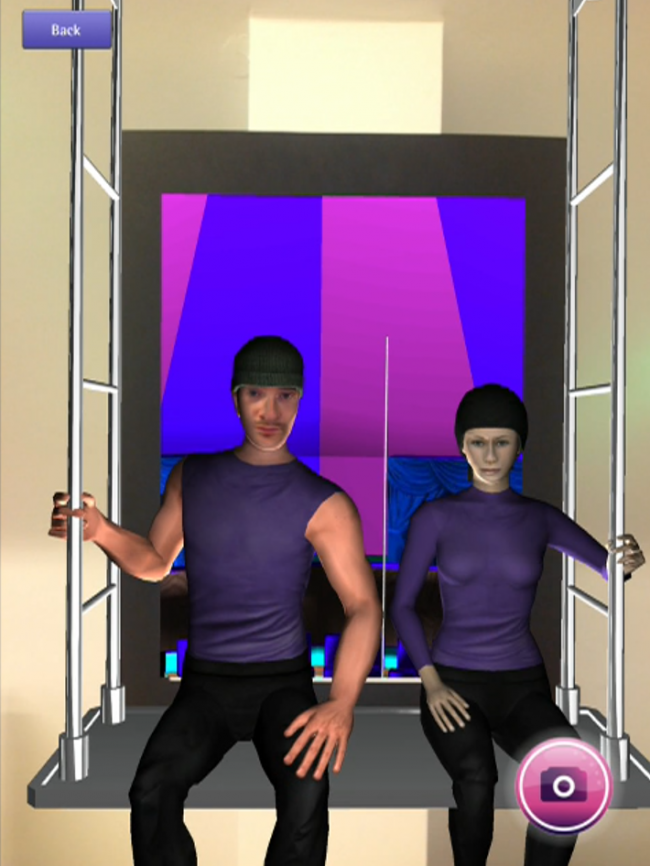 Most of our work is with our great partner agencies as we only focus on Digital Realities (Augmented & Virtual Reality). With this in mind, we support them fully with technical resource, demo app and pre-sales advice.

This is an example of one of our more public relationships with the great team at Sun Branding Solutions. 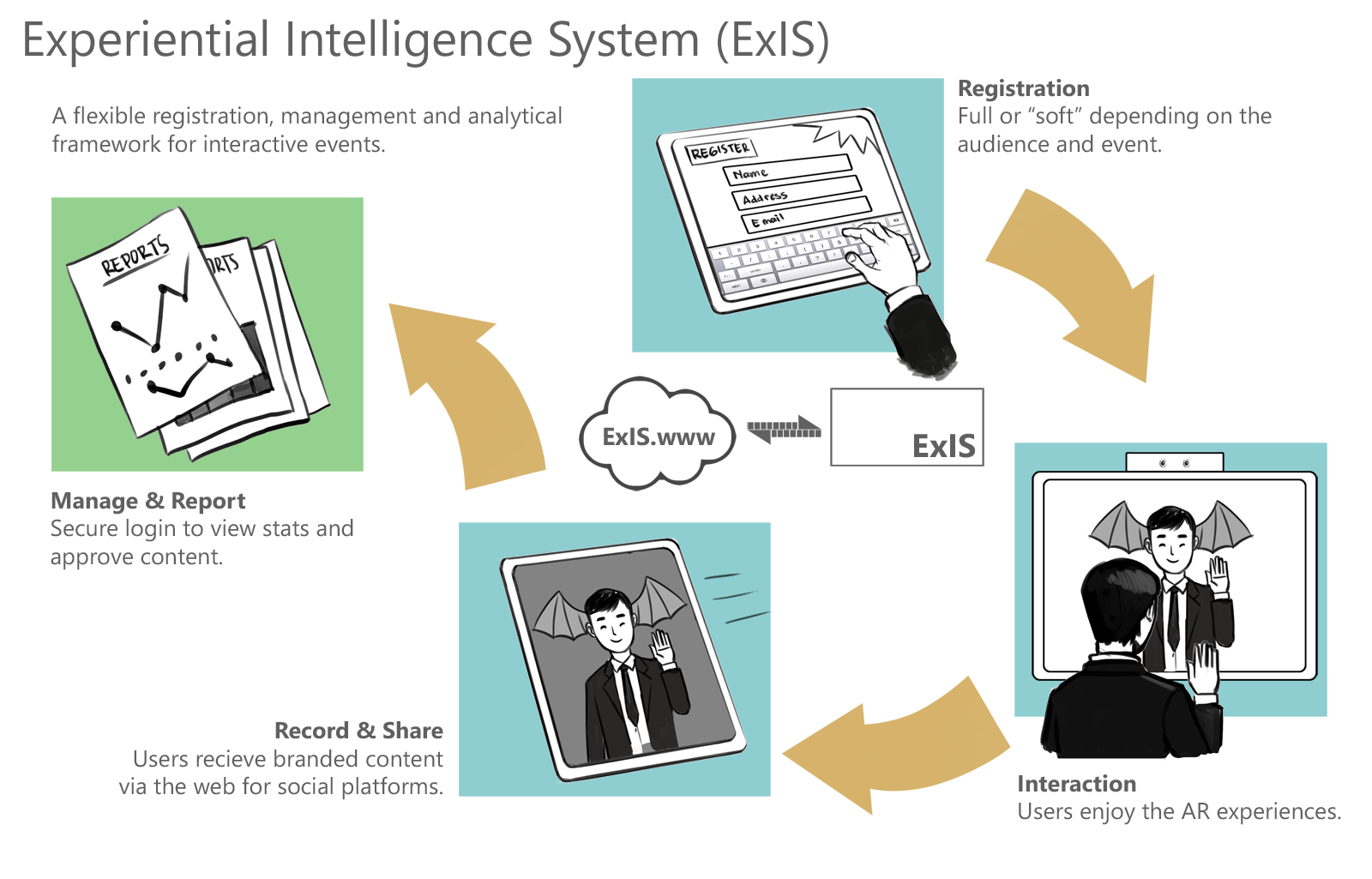 Building the Augmented Reality software for installations is challenging and great fun but we found that the digital infrastructure is sometimes a little “lacking” for the user, brand owner and partner agencies.

Experiential installations normally allow people to walk up and enjoy a visualisation or interaction, learn more about a brand and then walk away again.

The environments can often be erratic in terms of traffic flow, internet connectivity, access to equipment and touring kit. In addition, we found that in the early days information was often not collected, linked or analysed very well nor made available to key stakeholders in a timely fashion.

So, in the true Harmony way, we built a flexible, adaptable system that allowed varied forms of registration (from “detailed” to “none”), enjoy the activities freely and receive any branded content via email, Twitter, Facebook or other social platform.

All of this data is uploaded to our servers (any time an internet connection is available) and presented in a digestible form via a secure web portal. We can also add edit and publish options at this stage to ensure that all necessary guidelines are adhered to for the client.

We couldn’t be further from the Australian Outback here in our office in England, but the Internet is a wonderful thing.

Digital Rangers is a tourist app for exploring some of the most remote areas in Australia.
As you near a point of interest, the app will kick into action and explain some of the context, story and teachings behind the items. 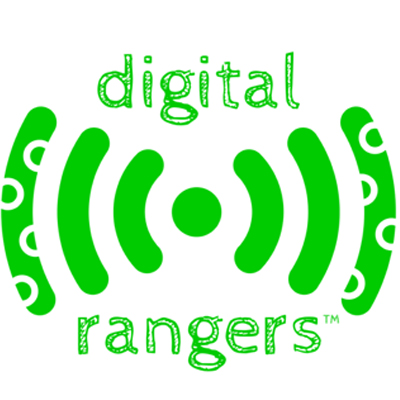